The neighborhood in the Citi

Beyond the obvious reasons of the on-field product producing soul-crushing five-game losing streaks, three-strikeout performances by their franchise third baseman, and expensive tickets made more expensive by surcharges and fees, I wonder if the problem of declining attendance at Citi Field is ingrained in some sort of original sin that was masked by lovable Shea Stadium, but has been laid bare by the not-quite-yet-beloved new Mets park.

Shea was indeed lovable, in some ways in spite of itself. Author and professor Dana Brand wrote a book that fondly remembered The Last Days of Shea. But as most Mets fans would admit, and as even Dr. Brand put it: “The line you often hear from Mets fans is ‘It’s a dump, but it’s our dump.'” It’s one of the many things I genuinely love about Mets fans over Yankee fans. Mets fans lost their oft-derided stadium (even oft-derided among themselves), and they still mourn it. It was built on land that inspired F. Scott Fitzgerald‘s forsaken Valley of Ashes in The Great Gatsby. Yankee fans, meanwhile, lost a palace with an unmatched history of championships (albeit one with a ’70s disco make-over) and replaced it with a gray gaudy mall — and Yankee fans hardly shed a tear for the old place (except when bidding up pieces of it at Steiner’s Sports). There’s no similar poetry devoted to the final days of old Yankee Stadium, not in the same vein as in the book by Brand, who obviously speaks for a lot of Mets fans. It’s like the Yankees brass (with the help of The City) plowed over a community park to drop an exclusive baseball version of the Palisades Center into the South Bronx, and Yankee fans loved them for it, even if that mall hardly loves them back.

Michael Shapiro touched on Flushing in the epilogue of his 2003 book about the last days of the Dodgers era in Brooklyn, The Last Good Season. Shapiro’s book was cited recently in a New York Times-led discussion about Robert Moses and Jane Jacobs in response to a question about Moses and the Dodgers leaving Brooklyn.

“There is talk about tearing the place (Shea) down and building a replacement in the parking lot. The new park would be called Jackie Robinson Stadium. It would, if it is ever built, have a retractable roof but otherwise look like a replica of Ebbets Field.”

OK, so prescience isn’t perfect for authors — A roof? Um, no (thank God). And Jackie Robinson got the rotunda, but not the naming rights to the entire place. But Shapiro was close enough (the book was published three years before they broke ground on the new field). He continues:

“The stadium, however, would sit at the confluence of highways, not city streets, which runs contrary to the idea of what Ebbets Field represented. It is an idea that other planners have incorporated in the new parks in Baltimore, Cleveland, Detroit, Seattle, Cincinnati, Milwaukee, San Francisco, and other cities that had built and then torn down parks like Shea. It is the reason Chicagoans fill Wrigley Field even when the Cubs are dreadful. Ebbets Field was a city ballpark, a ballpark to which people could walk. They could pass it on their way to work, and hear the noise from inside when they were heading someplace else. It sat in the middle of a place where many people lived.”

END_OF_DOCUMENT_TOKEN_TO_BE_REPLACED

My fandom in sports peaked between 1982 and 1985 when I was between 9 and 13 years old. For what seemed like the next 15 years, though, I felt a waning of rooting interest in sports. At first, it was a natural movement toward other interests. Later, when I realized I wanted to be a sportswriter, it was a conscious decision to be more Spock-like — rational, unemotional, unbiased, as I felt a good journalist should.

Even after I left the sportswriting world (at least, on a full-time basis), a decade of decidedly unlikable Yankee teams — from raging Clemens throwing a bat shard at Mike Piazza to the execrable Randy Johnson and his love of the camera to A-Rod’s mere existence in pinstripes — found me uncomfortable rooting for such an unlikable organization.

Perhaps the only blip in this sports fandom desert was in 2001-02 during the brief resurgence of the New York Islanders in their first year of Michael Peca as captain, with Alexei Yashin as their leading scorer and Chris Osgood and his red leg pads between the pipes. I took my dad to Nassau Coliseum about a month after 9/11 to see a game against San Jose that went to overtime, and I’ve never been to a hockey game in October where it sounded like the roof was about to come off.

And then, for me, came the Mets.

I haven’t been this interested in following a baseball team on a daily basis since I was 12. I’m trying to write in a coffee shop on the weekend, and instead I’m following play-by-play on MLB.com. At work, I’m sneaking out to the car to listen to an afternoon game on my radio in April during this 9-1 streak that seems to have been sparked by that 20-inning win, solidarity led by a smiling right fielder from Georgia sticking up for his manager, and the slugging son of a skinny bespectacled Eighties reliever.

Whatever the cause, this delightful turnaround has me cheering while drinking my Stewart’s coffee in a parking lot on a late lunch break as Angel Pagan hits a triple to drive in two runs (is there a more exciting baseball play than the triple?) Wednesday afternoon. Meanwhile, at home, my toddler son is singing “Meet the Mets” (somehow to the tune of the Ramones singing “Spiderman”) and I feel, suddenly, a little like the anonymous New Yorkers from 1962 as quoted by Jimmy Breslin in Can’t Anybody Here Play This Game? in the middle of the Mets’ lovably losing (in retrospect, perhaps) inaugural season:

END_OF_DOCUMENT_TOKEN_TO_BE_REPLACED 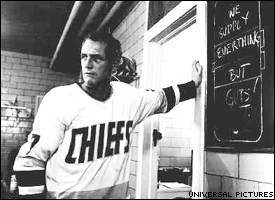 The Baby is not nearly old enough to watch Slap Shot — not even a cleaned-up-for-commercial-TV version — but when he is, we’ll enjoy it together, especially the memorable performance of the incomparable Paul Newman, who died yesterday.

For several years I skated on a beer-league hockey team, and quoting Reg Dunlop and the Hansons was practically required, maybe even more so than having a decent shot. In fact, I was practically the worst player on the team — I had a shit shot and my skating was subpar — but I could more than hold my own in quoting the best sports movie of all time in the locker room or (mostly) on the bench. Ironically, about four days ago, I couldn’t get “They brought their fucking toys with them!” out of my head.

Newman could skate for real, and he made Reg seem believable enough to be a hockey player that could wear a fur coat and still rip up the arena organist’s sheet music and rail, “Don’t ever play ‘Lady of Spain’ again!”

So here’s to you, Mr. Newman, and to Reg Dunlop and Cool Hand Luke and Fast Eddie and all your other memorable roles. Read Terry Frei’s tribute, and also Deadspin’s (which rightly tags him “racing enthusiast, actor, badass”), and Joe Posnanski’s, too (who says he “might have been the best sports actor in the history of Hollywood”), then raise a glass of Canadian Club and water and say a toast to old-time hockey, “like when I got started, you know?”

END_OF_DOCUMENT_TOKEN_TO_BE_REPLACED

Scratch any cynic, and you’ll find a disappointed idealist.

Mad Men and the Mets